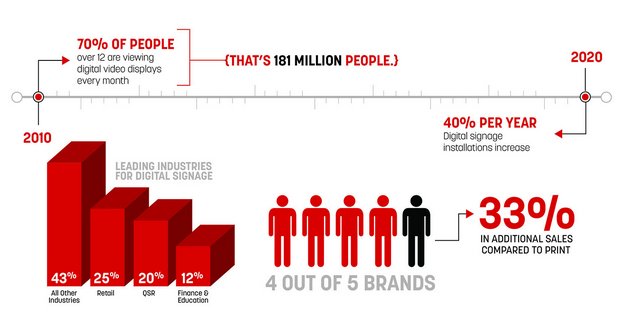 More companies are embracing the cost-effective opportunities offered by new dynamic advertising technology. Companies with digital signage are more likely to get customers in the store, direct them to more areas of the store and increase customer time in the store. Multiple studies prove the strong ROI and ROO of digital signage systems.

In 2010, Nielson tracked digital signage use in 120 grocery stores over time and found that 4 out 5 brands experienced increases of up to 33% in additional sales compared to when using printed signage alone(5). Also, 68% of customers agreed that digital signage would “influence their decision to buy the advertised product in the future” and 44% agreed it would “influence them to buy the advertised product instead of one they planned to buy.”(6)

With digital signage, messages can be changed on demand with very low cost (unlike printed signage), so companies can speak directly to their customer with the right message, in the right place and at the right time. Companies can switch menu items and products according to the time of day, season or available inventory with ease. They can also showcase more products and information than ever before with multiple features in a slideshow format, and enhance the in-store experience by engaging customers and creating dynamic interior decor.

70% of US residents 12 and older have seen a digital video display in a public venue in the past month, 52% recall seeing one in the last week.

Viewers are engaged with the content; nearly half (47%) of those who have seen a digital place-based video in the past month specifically recall seeing the ad.

Digital Video ads have an effect on purchase patterns. Nearly one in five (19%) of those who have seen a digital video ad said the made an unplanned purchase after seeing an item featured on the screen.

Four out of five product brands experienced significant increases of up to 33 percent in additional sales through the use of DOOH media.

Conscious awareness of digital display screens is generally high, according to the Nielsen study. Roughly three quarters of those surveyed (74 percent) noticed the monitors at the POS. The awareness rate for DOOH media is thus 23 percent higher than the average benchmark of other POS media analyses. In-store TV also gets good marks when it comes to acceptance: Display screen advertising and infotainment while shopping were well received by 62 percent of consumers.