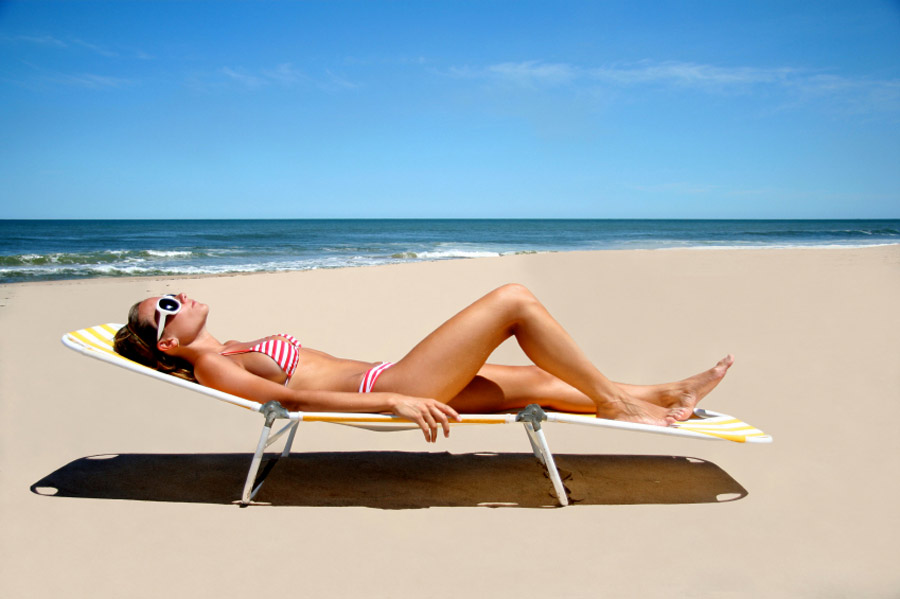 What You Need to Know About Tanning

Until the advent of spray tanning and sunless tanning products, the phrase “healthy tan” was a bit of a contradiction. Tanning with ultraviolet (UV) radiation, whether it comes from the sun or from an indoor tanning bed, is dangerous. So why do more than 1 million people tan in tanning salons in the United States every day?

Many tanning myths stem from confusion about the effects of different types of UV rays. Ultraviolet radiation is part of the light spectrum that reaches the earth from the sun. These wavelengths are invisible to the naked eye and include UVA, UVB, and UVC rays. While shorter UVC rays are absorbed by the ozone layer, UVA (long-wave) and UVB (shortwave) penetrate the atmosphere.

UVA rays account for the majority of UV radiation that reaches the earth, and most tanning beds primarily emit UVA rays. Though less intense than UVB rays, UVA rays penetrate the skin more deeply. They reach the lower layers of the epidermis where they trigger cells called melanocytes to produce melanin. This brown pigment is what causes the skin to tan, and also protects the skin from burning. People with darker skin produce more melanin and often do not burn in the sun. However, just because a person does not burn easily does not mean they are protected from skin cancer.

According to the Skin Cancer Foundation (SCF), UVA also damages skin cells called keratinocytes, which are located in the deepest layer of the epidermis. This can initiate the development of skin cancer.

UVB rays are the primary cause of most sunburn or skin reddening. They are more intense during certain seasons or times of day. For example, UVB rays are most intense between 10 a.m. and 4 p.m. during the spring, summer, and early fall months.  However, UVB rays can burn or damage the skin at any time of year.

For some time, there was conflicting information on the potentially dangerous effects of UVA and UVB rays — scientists once believed that only shorter UVB rays were of concern. However, new evidence shows that longer UVA rays can be just as damaging to the skin and eyes. By damaging the skin’s cellular DNA, both UVA and UVB rays increase the risk for skin cancer, cataracts (clouding of the lens of the eye), and premature skin aging.

UV radiation causes premature skin aging and increases your risk for burns. If you tan, however, that’s the least of your concerns.

Tanning indisputably increases the risk of skin cancers, including a rare but deadly form of cancer called melanoma. The incidence of melanomas diagnosed at a more advanced stage is on the rise, and researchers believe indoor tanning is to blame. According to the American Academy of Dermatology (AAD), use of tanning beds increases the risk for melanoma by 75 percent, and risk increases with each use. This number gets higher for those who begin using tanning beds before the age of 35, increasing the risk for melanoma to 87 percent.

These advanced cancers are lethal. According to the American Cancer Society (ACS), melanomas account for 9,700 out of an estimated 13,000 skin cancer deaths each year. Survival rates are higher (approximately 91 percent) in cases where the cancer has not metastasized (spreads to other parts of the body); however, five-year survival rates for regional and distant metastases plummet to 62 and 16 percent, respectively.

Non-melanomas, including basal and squamous cell cancers, occur both on the skin’s surface and within the deepest layers of the epidermis. These cancers are more common, and typically appear in sun-exposed areas, such as the face, ears, and neck. Unlike melanomas, these cancers rarely spread to other parts of the body.

Myths about Tanning and Sun Exposure

Some people think only childhood sunburns are dangerous. If you had a few bad childhood sunburns, they argue, why bother to protect yourself now? The damage has been done. However, the danger of tanning is dose-related and cumulative — that is, the more UV radiation you’re exposed to over a period of time, the higher your cancer risk. The U.S. Food and Drug Administration (FDA) closely regulates the use of tanning beds.

Another argument is that using a tanning bed gives you a so-called base tan that allows you to avoid sunburn. But research indicates that any radiation is dangerous, whether its source is the UVA rays that tan the skin or the UVB rays that burn it.

So, what’s the final word on tanning? Don’t do it. Avoid tanning beds and lamps, and limit your sun exposure, especially between 10 a.m. and 4 p.m., when UVB rays are most intense. Use a broad-spectrum sunscreen with a sun protection factor (SPF) of 30 or more. Wear a hat, sunglasses, and protective clothing when outdoors.

If you absolutely must have a deep glow, try a spray tan. The same chemical, dihydroxyacetone (DHA), is used whether you get airbrushed in a salon or apply the spray at home. Because DHA is a color additive, the safety of the agent has been reviewed and approved by the FDA. DHA is also used in sunless tanning lotions, mousses, bronzers, and moisturizers. Whether you pay a lot of money for them at a department store cosmetics counter or buy them inexpensively at a drugstore, it is up to you.